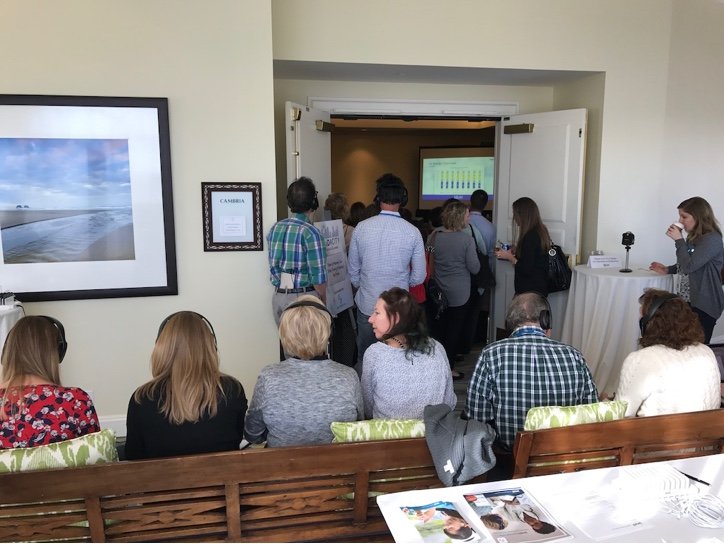 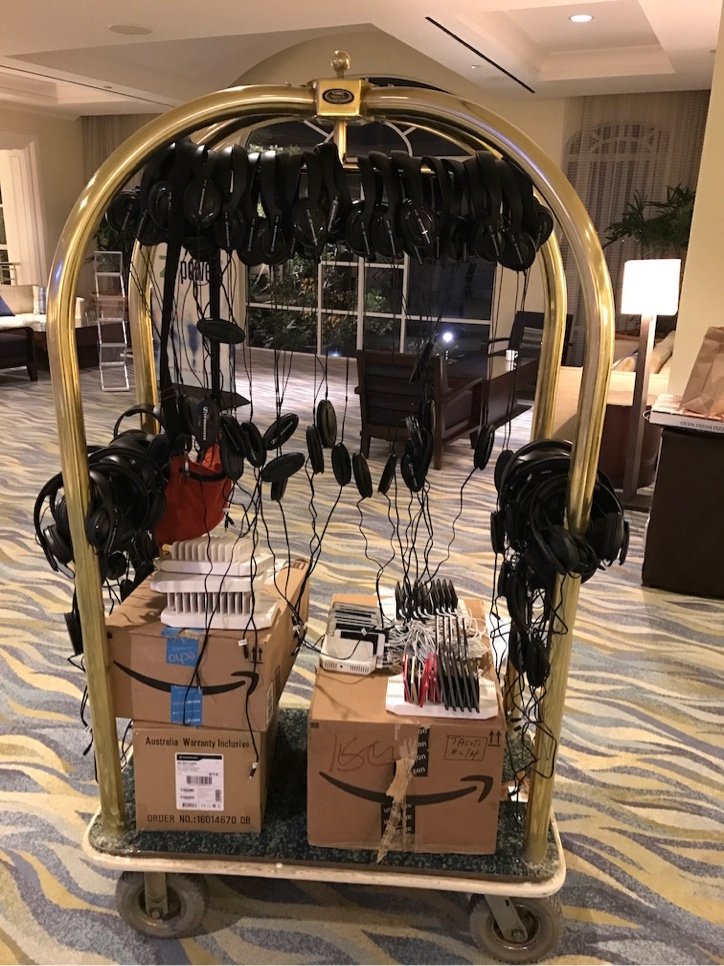 Contact our Press Officer for more information or to arrange an interview with our team.

Jacoti Lola was deployed and evaluated at the AuDacity 2016 congress. Up to 60 devices were simultaneously deployed in one single room.

The receiving (Listener) devices provided by Jacoti were 25 iPod Touch 6th generation and 25 iPad Mini 2 devices. The sending (Speaker) devices were all iPad Mini 4 serving 10 listeners each. In addition, Jacoti provided Sennheiser HDA202 II over-the-ear headphones and Sony MDR-EX15LP in-the-ear earphones for normal-hearing listeners. Users were also able to use Jacoti Lola with their own devices.

The five sending iOS devices were mass-configured using Apple Configurator with the latest iOS (Version 10.1.1). The receiving devices were configured in “Single App Mode”. This configuration proved useful as users had only to wake up the device for it to automatically connect to the room ’s Lola session. The IP addresses of the devices provided by Jacoti were all manually configured. Although not strictly necessary, this eliminated the need for a DHCP server and it also allowed for an easier way to monitor problems.

The 4ipnet EAP767 was used as the Wi-Fi Access Point (AP). We used one AP per eleven devices (one sender and ten receivers). Performance was excellent, suggesting that the number of devices per AP can easily be doubled in future deployments.

The Wi-Fi AP’s were configured in separate and free Wi-Fi channels in the 5-GHz band. Channel width was set to 20 MHz and the 802.11 mode was set to “pure n”. This ensured that far-away clients could not force the AP into one of its legacy modes (a, b, g), thus reducing overall performance. A Wi-Fi signal analyzer proved essential to configure the AP’s in free channels. DFS channels were also used; that did not have any negative impact.

Routers were randomly placed at the different venues, with no particular orientation. The signal of the AP was sufficient to cover each venue; the length of the largest venue was over 65 m.

The line-level signal from the mixer console was output to a Line6 Sonic Port connected to the lightning input of the sending device (iPad Mini 4). In some cases, a monitor mix was used, and sometimes the main mix was used. In the latter case, the monitor’s volume was optimised for both the PA-system and Lola input. This step proved important as digitally boosting a weak input signal with Lola’s gain slider may result in a suboptimal signal-to-noise ratio.

Thirty-two Lola users, including seven users (22%) with hearing loss, completed a proprietary questionnaire. Although speech quality and speech perception were not significantly different between both headphones, 21 of the 25 normal-hearing listeners (84%) preferred the Sennheiser supra-aural headphones over the Sony in-the-ear phones.