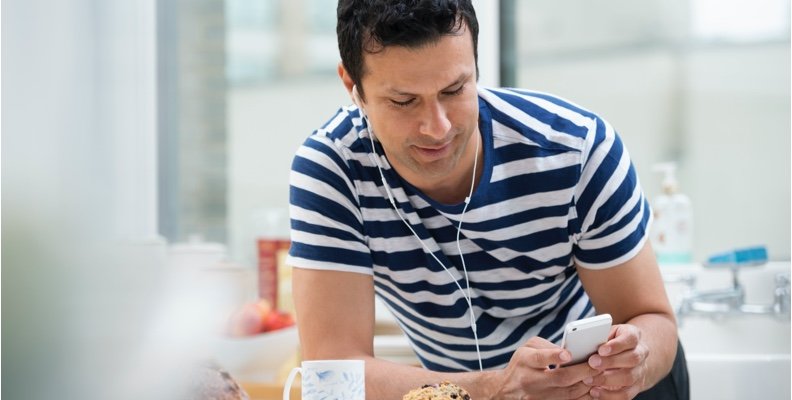 The DuoTone® audiometry procedure (Coninx, 2014) is a fully automated hearing test that uses pairs of pure-tone stimuli. Each pair consists of a lower pure tone frequency lasting 700 ms and, after a short silence, three beeps lasting 220 ms each of a higher frequency (each beep is the same frequency). During DuoTone testing, subjects are also presented with a third, “silent stimulus.”

Contact our Press Officer for more information or to arrange an interview with our team.

A recent peer-reviewed study published on August 4th, 2022, in the American Journal of Audiology, Home-based audiometry with a smartphone app. Reliable results? found that Duotone®, the hearing test method used in Jacoti Hearing Center, an iOS-based app intended for home self-testing of hearing, produced results as reliable as those generated by audiometric equipment in an audiologist’s office. In addition, the study found that DuoTone® was a reliable test-retest method.

One of the most common ways to evaluate a person’s hearing is through the administration of a pure-tone hearing test: the subject responds to a series of pure tones played back at different frequencies and at different sound levels. The results determine the threshold at which a person hears those frequencies. If the thresholds are high — that is, if a person requires a very high sound level to perceive a tone — it is likely the subject has a hearing loss at those frequencies. Pure tone tests have been extensively studied and been shown to provide a valid measurement of a subject’s hearing health.

Pure tone tests are typically administered by a trained hearing health professional (such as an audiologist) who works in a controlled office environment with a sound-proof booth and specialized audiometric equipment. However, research has found that reliable pure-tone testing results can be obtained outside the office using tablet-based hearing test apps. In those studies, testing was still administered and overseen by a trained hearing health worker in a controlled environment.

The question addressed by the present study is whether reliable testing results can be obtained in a situation in which users test themselves. If in situ self-testing for hearing health can be shown to provide reliable results comparable to audiometry performed in medical testing, there are significant implications. Self-testing may cut down on the frequency of “high touch” services (audiometry in the clinic), making hearing health monitoring much more convenient. Self-testing may also enable accurate testing to take place in states or countries where audiological services are rare or non-existent. Additionally, with the upcoming deployment of over-the-counter hearing aids in the US, self-testing may also become a significant source of data for hearing care for persons with mild to moderate hearing losses.

In Experiment 1, JHC running DuoTone® was compared to standard office-based audiometry equipment. For the thirteen adults tested (5 male, 8 female ranging in age from 31-96 years ), the differences between the two methods were less than 5 dB across all frequencies tested, validating DuoTone® as a reliable testing protocol. Researchers concluded that JHC can be used for accurate self-assessed hearing testing without supervision by a hearing professional.

In Experiment 2, the test-retest reliability of the DuoTone® procedure was studied utilizing data from a large number of JHC users who performed multiple hearing tests on themselves. Controlling for the confounding factors resulting from the uncontrolled collection of data, researchers determined that roughly 60 to 70% of the testing at all frequencies was within 5 dB, concluding that DuoTone’s test-retest capability is indeed reliable.

In short, Jacoti Hearing Center has been demonstrated to provide reliable pure-tone hearing testing with a test-retest reliability comparable to audiometry performed in a clinical setting.

Consequently, Jacoti Hearing Center is an effective tool for remote audiometry as the first step in a diagnostic process or as a follow-up measure. The results obtained by JHC can be used for hearing loss compensation with hearing devices (e.g., to program over-the-counter hearing aids and smartphone-based hearing aid apps). Finally, data from JHC can be used for cloud-based data analysis of large real-world hearing health data volumes.